It’s been awhile since I’ve posted. I’ve been busy juggling too many projects and unfortunately the blog had to take a back seat. I’d like to blog more again – and since I’m currently on a 5 day vacation, I am going to start this week!

A lot has happened this week that has made me want to reflect on my life. I have a pretty spotty memory. I have glimpses of things that have happened but it’s very difficult for me to peice things together in a timeline. Some say that after a traumatic event things like PTSD cause the mind to protect the body by suppressing those memories. Recently I had a “relapse” of sorts, where I became quite paranoid of every male who I came across. When I was 12 I was sexually assaulted by a man who I thought I could trust. He manipulated me and no matter how smart I thought I was, I fell for his traps. He was smarter. Anyway, I recently, and quite randomly (I think) became quietly paranoid. I say quietly because I didn’t talk about it – but inside I was anxiety ridden. I’m not too sure why but after 17 years memories began to flood in.

I bring this up only to show a point – so stay with me here.

This past Tuesday, July 5th, started like any other – except I had only 3 hours of sleep and was exhausted. Since I worked the night before until midnight and then had to get up and teach a body pump class at 6am, I decided it would be a good idea to go and get breakfast before work. I bought a bagel with cream cheese and two donuts – and without guilt, ate all of it! I went to work and the day was like any other, that is until my phone rang. My very best friend Alycia was calling – that was peculiar, I thought. I excused myself and I called her back – what happened next is a bit of a blur. She was hysterical, her brother had died in a tragic car accident and was found at 7am ejected from his vehicle. He had died suddenly from injuries that occurred as a result of his crash. The reports later said he likely fell asleep, he was also intoxicated. My heart sank. Tristan was a very good friend, we had history. We briefly dated in 2006, but we also became very close and the three of us even lived together for a while – we were family. Because I was having some issues with my car, I needed to wait to make the 4.5 hour drive up to Alycia to be with her and the remainder of the family. I spent the rest of the day quite numb, trying to keep busy, broken.

The next few days happened pretty fast, I fixed my car on Wednesday and headed north to be with my friend. For two days I spent mostly quiet, distracting myself with her children, just being there for support as a sounding board when needed. We were up until 3am both nights and work up between 6 and 7am the following days. During the silent times I tried with everything that I have to remember – remember all of the good times, the laughs, searching for photos to jar any glimpse of a memory. I don’t know if I’m more sad that I won’t be able to make any new memories or if it’s because I can’t remember most of the last 10 years that I’ve known Tristan. A few photos and videos have popped up, they are helpful – but my memory is shot. I wish someone could just electrocute my brain until the memories flood back. I wish my mind didn’t protect me from my history.

At least my mind has stopped searching for memories of the man who broke me all of those years ago. 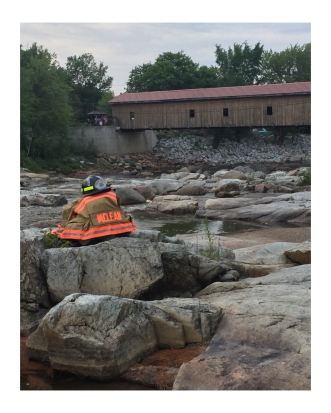 The wake/funeral ceremony were scheduled for Sunday, but they were also going to hold a candle light vigil Friday night. I had to leave Friday night because I had a trip planned with my husband to Charlotte, NC, so I stayed until the vigil was over. It was beautiful, peaceful, and full of sadness. We placed candles around his fireman gear on the rocks by the covered bridge. He enjoyed being in nature and spent a lot of time fishing and just sitting by that bridge.

It was very hard for me to leave. I wanted to stay and be there for my friend, for me. I wanted to spend time with the family and listen to stories – maybe this was a selfish motive so that I could just remember more, but maybe so I could grieve as well. He will always be in my heart – even if it takes 17 years to remember everything. I write this here today so that one day I can come back and remember. Remember his life, remember his death.

On Sunday we began our drive to Charlotte. My heart has been heavy this entire week and during our drive a few songs came on that brought me to tears. My husband has been great, very supportive, he knew Tristan too. It took us 10.5 hours to get to Charlotte, but it was a very pretty drive! Virginia is a very large state – ha! 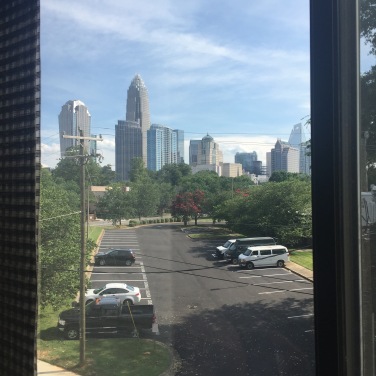 We decided not to stay in a hotel this time, we rented a studio apartment in the fourth ward (that’s the name of the area – kind of like soho or tribeca in NYC) with huge open windows and an awesome view of center city (or is it city center?) from our bed. We rented through AirBnB and let me tell you, I think we will always do this from now on. The apartment looks exactly like the photos online and there was water in the fridge! Pretty much everything you could ever want was here – utensils, pots and pans, soap, towels, toilet paper ha! The TV was a bit of a challenge last night since it’s a ROKU? I had never had experience with that but I’m glad we’ve been without cable for quite some time so it wasn’t a big deal that we didn’t have cable TV on our first night. I’m currently sitting in a recliner/LazyBoy chair that I wish I could strap to my car and take home with me! I told Pat that I would live in this exact apartment if we could! I could imagine Charlie and Miley running around, and Louie curled up on the bed. There’s a train that runs all day (and night) right nearby, which I can imagine would be annoying if I had never lived in NYC or if I didn’t grow up next to an airport! Noise is not something I am not used to! 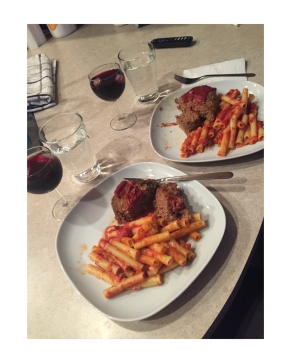 Last night we went to Target and Trader Joes to
pick up some food and essentials so we had something to eat for breakfast and dinner this week. For dinner we had baked ziti and meat loaf from Trader Joes with a very small glass of wine!
We plan to go out to eat a few times but really want to treat this like we live here for 5 days rather than a true vacation where we spend all of our money! The lady checking us out at Trader Joes used to live in Beacon, NY – what a small world! She said she lived there for two years and it made her really appreciate Charlotte – she said we’ll love it and welcomed us to her city!

Today we don’t have many plans, I believe we are going to just start walking in the direction of those big buildings!

Have you ever been to Charlotte? What are the must see and must do things here? Do you use distraction as a way to heal and grieve? Am I the only one who can never remember anything unless I see pictures or videos or read the journals from that time? I hope I don’t forget my past with my husband…