I wish I could tell you that we made it to 38 weeks with no complications, but alas, I can not. It was a Thursday morning, I was 37 weeks pregnant and heading to the doctor for our last appointment before my scheduled c section. I was scheduled for an NST (non-stress test) and then we were scheduled to meet with the male doctor in the practice (we had never met him before). My blood pressure reading was over 160 during the NST, and the doctor was concerned that I was developing pre-eclampsia, so after speaking with my primary OB, they decided that I should go to the hospital and that I may be having the twins that day. 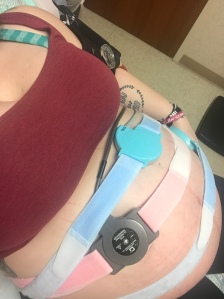 When we left the doctors office we decided to go straight home to pack our bags just in case. Walking into our apartment, I grabbed my dog and I sobbed. I’m still not sure why I cried at that moment; fear of delivering sooner than I had expected, sadness for having to leave my dogs, fear that if something happened to me during surgery and I didn’t not survive, I wouldn’t be around for my pets or these babies that I held inside me for so long, fear of the unknown, or a combination of it all. What I do know is that I wasn’t crying because I was happy.

When we arrived at the hospital, the nurse was very sweet and kept everything pretty lighthearted. She was the same nurse that we had met during our hospital tour so I was immediately comforted by a familiar face. They strapped my belly back up to the NST monitor and monitored my blood pressure for over an hour. All of my readings were normal, and after about 3 hours they sent us home with the expectation that we would come back on Saturday for more monitoring and that I would no longer go to work as I needed to limit stress.

Saturday (37 weeks, 3 days pregnant) we arrived at the hospital for more monitoring. Another few hours on the NST and blood pressure monitors and I continued to have normal readings. They sent us home with the expectation to go into the doctors office on Monday for a blood pressure check.

Monday (37 weeks, 5 days pregnant) morning I decided that I wasn’t going to the doctors office for the check. I was feeling fine and resting. My C section was scheduled for that Thursday (38 weeks, 1 day) and unless I began feeling signs of high blood pressure (headache, visual changes) I was going to just stay home and relax.

Wednesday night, we made sure that everything was packed in the car for Thursday morning. We had to be at the hospital at 5:30am for my scheduled C section at 7:30am so we wanted to be sure that we had everything packed and ready to go.

(I’ll make a post all about what was in our hospital bags, what we actually used and what we could have done without, at a later date.)

That night, we got a few hours of sleep but I was so uncomfortable from being so large that good sleep was not something I was accustomed to nor something that happened – at least for me. I was focused on making sure my husband slept because it was very important to me that he was well rested so that he could be there 100% present when these babies came into the world.

We arrived at the hospital a little after 5:30am on Thursday, March 1st, 2018. It was still dark out when we got there but I do remember it was a little chilly. We parked the car and walked in. At the front desk the security guard sent us right up to the 6th floor (the maternity floor) of the hospital where we checked in with our nurses and was brought right into the OR prep/recovery area. An IV catheter was placed and two or three nurses asked me many of the same questions – to say that I felt like I was being interrogated is an understatement, but they were all very nice.

They asked about family history, medical history, if I felt unsafe at home, and all of the typical “being admitted to the hospital” questions. Before surgery the one nurse shaved the area that would be where my incision would be, after I apologized for not coming in clean shaven but I just couldn’t see/reach and figured they’d do a much better job than I would anyway (she laughed and said not to worry, as most people don’t). Around 7:15am my doctor arrived and had me sign a consent form for the surgery, and then she went off to scrub in. I was wheeled off to the OR while my husband was kept right outside in the hall while I was prepped. The nurses and anesthesiologist were great and held my hand/talked me through all of it. I was asked to sit on the OR table and lean over where the nurse stood in front of me to help keep me calm and help push my shoulders down. Apparently when you are tense, you scrunch up your shoulders which makes it difficult for the spinal to be placed. The anesthesiologist talked to me about what he was doing, and walked me through each step which I greatly appreciated since I couldn’t see what was happening. The lidocaine was an unexpected painful few injections. I don’t remember offhand how many there were but there were quite a few times where he said “just a little pinch, warmth, stinging.” I’m not too sure when the spinal needle actually went in because the lidocaine did its’ job with great success but I do remember not being able to move my feet. It’s a very hard thing to explain as I didn’t feel like they were missing, I just couldn’t move them. They laid me on my back and began prepping for surgery. The anesthesiologist and nurses put up the blue drape, strapped my arms down out the side (more on that later), and set up my IV fluids and monitors. Immediately I started asking for my husband, and they brought him in moments later. He sat down next to me on my left side and held my left hand. I started feeling very nauseous, and was having trouble breathing. The anesthesiologist said it was from the spinal and put a little kidney pan next to my face on the right side so I could vomit (which I did, multiple times) and kept assuring me that I would feel better and it would be ok. I’m not sure if they gave me zofran but I did begin feeling better soon after but felt like I was in a bit of a haze which honestly worried me that I was losing too much blood and was going to pass out (thankfully I did not). In the few moments that had passed after that, I asked my husband if he could see anything to which he replied that he wasn’t looking. I could see the reflection of what was happening in the surgical light above me, so I wanted to be sure he was okay and wasn’t going to pass out on me. I kept asking him if he was okay and of course he said yes. I remember the doctor saying “she’s having surgery and she’s asking if he’s okay? How sweet these two are” and the doctors (yes I had two – Dr Kleban and Dr Jhang) having conversation about their weekend plans. I remember laughing and saying to my husband “are they really just having conversation like we aren’t even here?” Soon after one of the nurses said “Dad, are you ready with your camera? Baby A is about to be born” followed by some “oh look at him” and the first of what would be MANY cries from our first born son. They immediately took him over the to warmers where they announced his weight at 5lbs 6oz, and his length at 18.5”. Seconds later the same nurse said “dad, do you have your camera?” Followed by cries that sounded almost identical to the first babies, from our second born, our daughter. 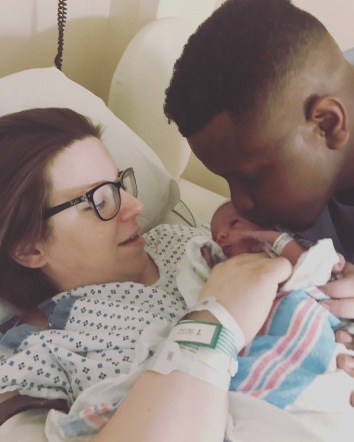 My sight was very limited as I could only see my husband, who was bright red with tears of shear joy streaming down his face and lots of people surrounding the two warming beds weighting, measuring and cleaning off our babies. They announced that Baby B was also 5lbs 6oz and measured 19”.  The nurses then asked what their names were. Our response: Baby A is Declan Gerard Thomas, and Baby B is Teagan Marie Thomas. Soon after they had left Declan in his warming bed pretty much alone and all of the nurses and baby doctors were with Teagan.  They explained to us that she was having some breathing issues which were totally normal for the second baby of twins to have and they were going to bring her to the nursery to be monitored. At this point the nurse distracted me by bringing over our son to take some photos of him next to my face. She took my glasses off which made me annoyed and I told her to put them back because I am never without my glasses, plus I can’t see without my glasses and I wanted to see my son.

He was then swaddled and put in the bassinet for Daddy to wheel out while I was moved back to the recovery room where we could do skin to skin and begin trying to breastfeed. Soon after, we were informed that she was being transferred to the NICU for monitoring but would hopefully only be there for a few hours. We had to wait until she was settled in the NICU before my husband could go see her, so we spent that time with our baby boy, worried for her, but excited to be spending time with him. Once he was able to, he went to visit Teagan in the NICU. Little did we know, she wouldn’t leave the NICU until Sunday.

The following few days were a bit of a blur between visitors coming in and out, our daughter being in the NICU, settling into this new role as parents, and dealing with post operative pain management. 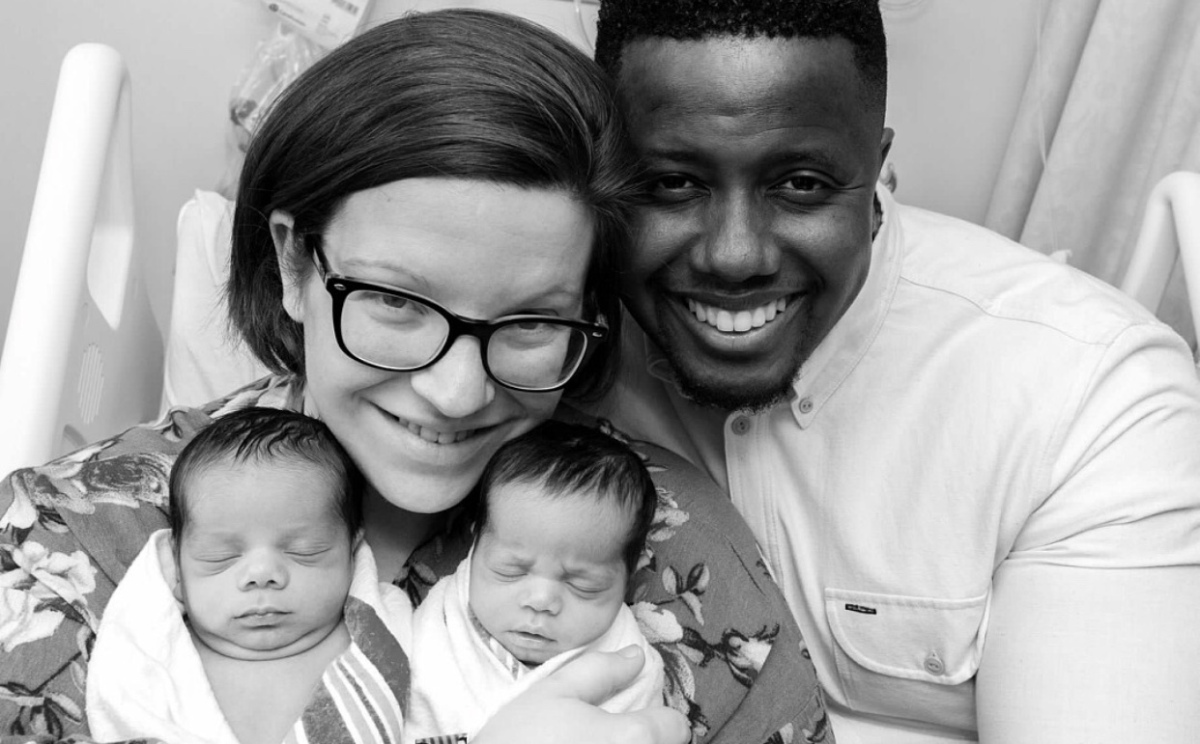 … Stay tuned for more on our hospital stay, my thoughts on my c section recovery, being first time parents of multiples, and breastfeeding twins!